Poland in the Age of Napoleon - Part 5: Polish Eagle Ascendant

This is the fifth part of a blog series looking into the experience of Poland during the Revolutionary and Napoleonic Wars. The previous part covered Napoleon’s victory over Prussia and Prussia in the 1806-07 campaign. This led the establishment of the Duchy of Warsaw, a Napoleonic client state ruled by the King of Saxony, created out of Polish territory lost to Prussia during the partitions. This installment will cover the military successes of the Poles between 1807 and 1809 both on Polish/Varsovian territory and further afield.

Following the Treaty of Tilsit, Napoleon was effectively master of Continental Europe. With Russia joining the Continental Blockade, only Portugal and Sweden remained outside it. In November 1807 Napoleon had ordered General Jean-Andoche Junot to invade Portugal through Spanish territory, in an effort to force Portugal (England’s ally since 1386) to join the Continental Blockade against Britain. These events would lead to a civil war in Spain in 1808, engulfing the Iberian Peninsula in a conflict that would come to be known as the Peninsular War. However, Spanish forces hostile to the French presence were poorly led and equipped and were easily suppressed by French troops.

While Napoleon initially considered the war in Spain as a sideshow and simply a task of suppressing local uprisings, a couple of events in the summer of 1808 forced him to pay greater attention towards Spain. In July 1808, the Spanish Army of Andalusia defeated General Pierre Dupont’s corps of observation, resulting in the surrender of Dupont’s entire force. Almost exactly a month later on 21 August, a British army commanded by General Arthur Wellesley (the future Duke of Wellington) would defeat Junot’s Army of Portugal at the Battle of Vimeiro.

Sufficiently alarmed by these setbacks, Napoleon decided to take charge himself, and led an Armée d’Espagne into Spain in November. Napoleon’s army of more than 200,000 men (including some 4,000 men of the Vistula Legion) easily overwhelmed the defences of the Spanish armies in a double envelopment. Having overcome the bulk of Spanish resistance, Napoleon marched on Madrid with 40,000 men. General Benito de San Juan mustered a ragtag force of 12,000 men defending the road to Madrid. Of these, 9,000 men and 16 guns blocked the narrow Somosierra Pass 80km to the north of the Spanish capital.

The Spanish occupied formidable positions with three batteries of two guns each placed on the road, and the remaining 10 in reserve at the summit of the pass. Napoleon attempted to outflank the position with infantry and cavalry but his efforts were beaten back. Marshal Berthier’s aide-de-camp Colonel Piré led a cavalry charge which was quickly repulsed. He reported to the Emperor, ‘It’s impossible!’ An irritated Napoleon rode to his Polish Light Horse and called out “Poles, take the cannons for me!”

In temporary command of the III Squadron, Jan Kozietulski led some 200 troopers four men abreast in a furious charge towards the first battery. Despite taking many casualties from musketry and cannon, the Polish cavalry managed to reorganise itself and continue its charge, successfully taking the first battery and cutting down the gunners with their sabres in fierce hand-to-hand combat. The disabling of these guns would enable Napoleon’s infantry to move forward and continue the attack.

It is likely that Napoleon only envisaged his Poles capturing the first battery. If so, he would have been astonished to see Kozietulski’s men continue their charge up the pass in suicidal fashion. Either misinterpreting their orders or carried away by their confidence and momentum, the Polish Light Horse charged against the second battery, several hundred metres away. At this point Lieutenant Andrzej Niegolewski’s platoon joined the charge and the second battery was taken. With men and horses falling around him, Kozietulski was dismounted and Captain Dziewanowski took over and charged at the third battery. Dziewanowski was soon taken out of action himself, but the remainder of the Polish cavalrymen successfully took the third battery.

The Polish Light Horse had already accomplished an incredible feat, but they were not done yet. Reduced to a few dozen men under Niegolewski, they charged up the summit of the pass in an attempt to capture the remaining guns. They managed to sabre their way through the astonished gunners, but were soon swarmed by infantry. During the bitter fighting Niegolewski was heavily wounded and left for dead, suffering nine bayonet wounds and a sabre cut. The remaining Poles were forced to withdraw. They were soon joined by French and Polish reinforcements under from Napoleon’s personal escort led by Tomasz Łubieński, whom Napoleon had sent ahead to exploit the initial success. These fresh troopers joined up with the remnants of Niegolewski’s platoon and recaptured the guns. The French infantry was now able to march up the pass, forcing the Spanish to withdraw. The Polish cavalry had suffered over 100 casualties but written their name into the history books. The astonished Emperor addressed them, “I proclaim you my bravest cavalry!” 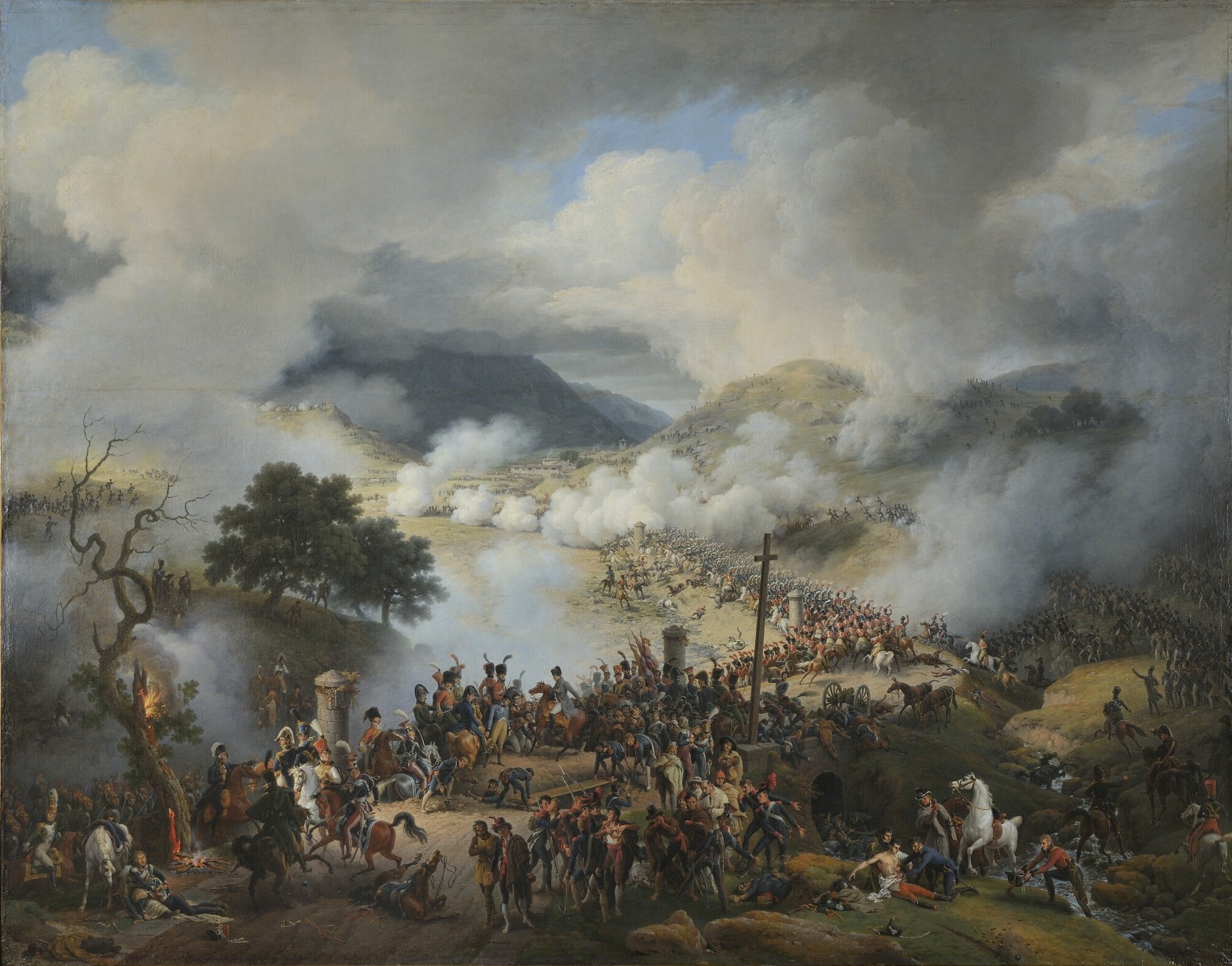 The victory at Somosierra enabled Napoleon to reoccupy Madrid, and his brother Joseph was duly restored as King of Spain. The Emperor turned his attention towards the British army of some 30,000 men under Sir John Moore marching into Spain in an attempt to aid the Spanish armies. Napoleon successfully forced Moore to retreat to Corunna, but left for Paris in the interim after hearing rumours of a planned coup, leaving Marshal Soult in command of the pursuit. By the time the Emperor returned to Paris on 19 January 1809, he not only had to restore his political authority in the capital, but prepare for a new campaign against Austria.

Seeking to take advantage of Napoleon being distracted in Spain, the Austrians declared war on France in early 1809 in an effort to regain some of the territory it had lost to Napoleon in previous wars. The main Austrian attack fell on Bavaria, but a diversionary attack was also planned against the Duchy of Warsaw. The Duchy was lightly defended due to the Polish contingents fighting in Spain, as well as the units which joined the Army of Germany that was being organised by Napoleon’s Chief of Staff Marshal Berthier.

On 14 April, Archduke Ferdinand of Austria-Este crossed the border into the Duchy with 32,000 men. Taken by surprise, Prince Poniatowski ordered the mobilisation of 16,000 Poles and Saxons and selected a good defensive position behind a stream at Raszyn, on the southwestern approaches to Warsaw. The two armies clashed during the afternoon of 19 April, with the impatient Austrian commander eager to press forward to Warsaw. Austrian attempts to outflank the Polish position were bogged down as the cavalry struggled to make progress on the muddy ground saturated by the April rains.

The Austrians were more successful in the centre, overwhelming 800 men of Colonel Cyprian Godebski’s 8th Regiment. Godebski was mortally wounded and evacuated from the field. At that moment Poniatowski appeared on the scene and rallied the men, before dismounting and leading the 1st Regiment in a bayonet charge. The attack was successful and the Austrians routed. The battle continued to hang in the balance but the Austrians managed to break through the initial Polish position in the evening. The town of Raszyn was destroyed by artillery and Poniatowski was obliged to fall back to Warsaw. The Poles inflicted around 2,500 Austrian casualties at the cost of 1,000 of their own.

While Poniatowski was forced to give up Warsaw to the Austrians, he led his small army southeast into Galicia and proclaimed a war of liberation. The Poles were finally able to carry out what Dąbrowski had hoped to achieve with his legions in the late 1790s. On 14 May the Poles took the city of Lublin. Sandomierz and Zamość fell in quick succession. Poniatowski’s ranks swelled with enthusiastic volunteers and set up a temporary Polish administration. These developments obliged Archduke Ferdinand to leave Warsaw and retake Galicia. A Russian army on the Austrian border which was theoretically allied to Napoleon and the Poles threatened to intervene to prevent Galicia falling into Polish hands. The Austrians took back the major cities and Poniatowski was once again on the back foot. However, Napoleon’s success at Wagram in July 1809 ensured a successful outcome to the campaign for the Poles.

While Poniatowski was duelling with Archduke Ferdinand, Napoleon had successfully driven Archduke Charles’s main Austrian army out of Bavaria, along the Danube, and into Vienna before defeating Charles at Wagram on 5-6 July. Polish troops who fought with Napoleon’s main army demonstrated their bravery on several occasions during the 1809 campaign. At Wagram, the Polish Light Horse of Napoleon’s Guard – the same regiment which had won the day at Somosierra – played an important role supporting General (later Marshal) Macdonald’s attack in the centre. The Poles charged at the Austrian Schwarzenberg uhlans (most of whom were Poles from Galicia.) According to the memoirs of Dezydery Chłapowski, the regiment had disarmed the uhlans’ lances during the fierce hand-to-hand fighting, and then used those lances to charge after them. 150 prisoners were taken, most of whom were happy to change sides and join the ranks of their Polish brethren. After the battle the regiment was equipped with lances and renamed the Polish Guard Lancers.

Following his victorious campaign, Napoleon signed the Treaty of Schönbrunn with Austria in October 1809. Under the terms of the Treaty, Austria ceded western Galicia and the county of Zamość to the Duchy of Warsaw. These territories were taken by Austria at the Third Partition, and their incorporation increased the size of the Duchy by fifty percent. These new lands allowed the Duchy of Warsaw to increase the size of its army to 60,000 men, and also changed its political dynamic. The Czartoryski and Zamoyski families held large estates in these lands, and thus the power of the nobility increased at the expense of the middle classes. The Napoleonic Code was extended to these areas, and the peasantry thus deprived of the few rights they had. 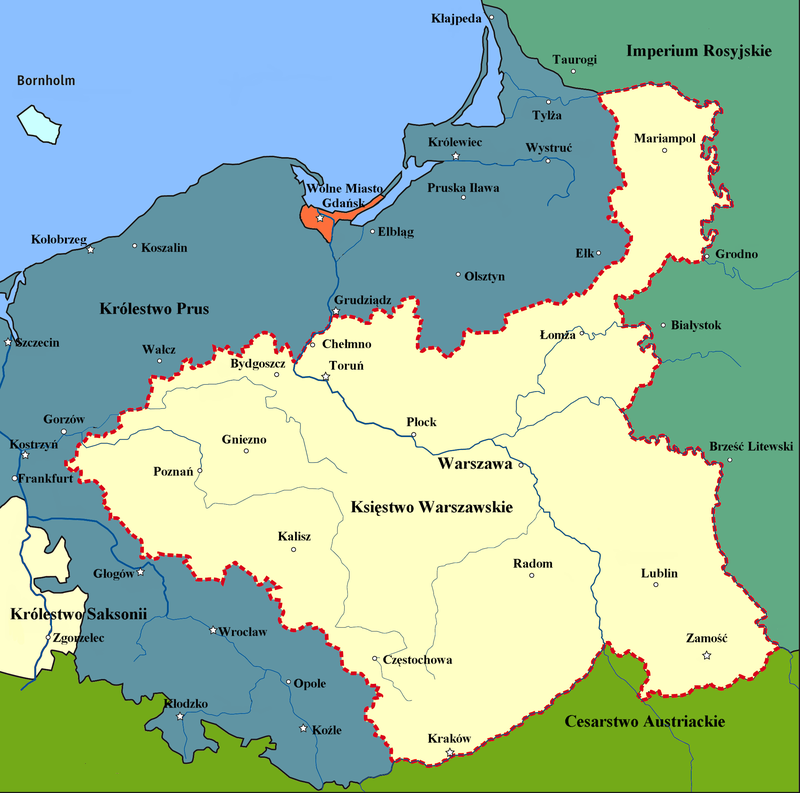 The Duchy of Warsaw after 1809

The consequences of the 1809 campaign complicated relations between France and Russia. Napoleon had been seeking to consolidate his Russian alliance by marrying one of Tsar Alexander’s sisters, but the Tsar’s reluctance to do so forced Napoleon to look elsewhere. After making peace with Austria, he married Habsburg princess Marie Louise in 1810 in an effort to consolidate his new alliance with Austria. The territorial expansion of the Duchy of Warsaw also complicated relations between France and Russia. The Duchy had now recovered partitioned territories from Prussia and Austria, and the renewed confidence among the Poles that they might restore their former state naturally threatened the interests of Russia, the third partitioning power. Tsar Alexander was afraid that Napoleon would turn on him and invade Russia in order to restore the partitioned provinces to the Duchy of Warsaw. Napoleon’s efforts to placate the Russian Tsar by handing him the district of Tarnopol from Austria did nothing to dampen Alexander’s fears.

In January 1810 Russian Foreign Minister Nikolay Rumyantsev and ambassador to Paris Alexey Kurakin asked Napoleon to formally declare that he was not in favour of re-establishing a Polish kingdom. While Rumyantsev was able to negotiate a treaty to this end with Armand de Caulaincourt, Napoleon’s ambassador in St Petersburg, the Emperor himself decided not to ratify it. This did nothing to calm Alexander’s anxieties. As retaliation, in December 1810 he allowed Russian ports to reopen to British trade while imposing heavy duties on imports by land, which mostly came from territories controlled to some greater or lesser degree by Napoleon. This violation of the Continental System which Alexander had signed up to at Tilsit further inflamed tensions between France and Russia, who remained allies on paper. Both sides prepared for the resumption of hostilities, and the fate of Poland would be at the centre of it.