Queen Louise of Prussia - Part 1: Mother of her nation

This month, we turn our focus on Queen Louise of Prussia, the strong-willed spouse of King Frederick William III whom Napoleon memorably described as ‘the only man in Prussia.’ This post consists of an overview of Queen Louise’s short but influential life. Next time, we will go in-depth into her interactions with Napoleon in 1806-07.

Duchess Louise (Luise) of Mecklenburg-Strelitz was born outside Hanover in 1776. Her father Charles (Karl) was the brother-in-law of King George III of Great Britain and had been made Governor of Hanover, effectively making him sovereign ruler of the German electorate. He had married her mother, Princess Frederike of Hesse-Darmstadt, in 1768. The couple had ten children, only half of whom survived infancy. Frederike herself died in 1782 soon after the birth of her tenth child, who survived one day. She was only 29 years old.

Duke Charles would marry Frederike’s younger sister Charlotte in 1784, but died the following year after giving birth to their son, another Charles. The heartbroken twice-widower resigned his governorship and moved with his family to Darmstadt. The young Louise spent the rest of her childhood with her younger sister Frederica under the wing of her maternal grandmother, receiving an enlightened education and familiarity with the works of Goethe, Schiller and Herder. She accompanied her grandmother on many journeys to other German states, including two trips to Frankfort-am-Main to witness the coronations of Holy Roman Emperors Leopold II and Francis II in 1790 and 1792, when all the talk was about the prospects of war with Revolutionary France. Louise would live the rest of her life in the shadow of the war which engulfed much of Europe.

The War of the First Coalition turned Germany into a warzone, compelling Louise and her family to evacuate to Hildburghausen in Thuringia. Even the imperial city of Frankfurt had been captured by French Revolutionaries, though it was taken back the following year by an army of Prussians and Hessians. Louise’s Hessian relatives were close relations of the Hohenzollern Court in Berlin, and it was agreed that she would marry Frederick William, the Crown Prince of Prussia. In March 1793, days after her seventeenth birthday, Louise travelled to Frankfurt accompanied by Frederica, and met with King Frederick William II of Prussia. The King of Prussia was so impressed by the young girls that in the event, Frederica was also betrothed to the King’s younger son, Prince Louis Charles. Thus, the two sisters could remain together in Berlin.

Louise found in her future husband a 22 year old man who had just experienced the glory and the destruction of war for the first time. Crown Prince Frederick William was kindhearted and pious, but lacked the self-confidence of his great-uncle Frederick the Great, whose shadow continued to loom over Prussia. While the couple were very much in love, Louise was apprehensive about the reception she would receive in Berlin. First impressions were promising. Arriving in Berlin in late December, the two Mecklenburg princesses were welcomed enthusiastically by crowds of people who had gathered by the roadside. The wedding took place just before Christmas and accompanied the traditional festivities of the season.

Despite her warm welcome by the people, it did not take long for Crown Princess Louise to feel uncomfortable at the Prussian court – divided between supporters of the King and his neglected Queen. Louise got on well with her father-in-law, the two being united by a love of music and German history. Nevertheless, the Crown Princess preferred to spend her time outside the capital, and her husband bought the estate of Paretz to the west of Berlin and ordered the construction of a palace for this purpose. The crown princely family was also growing larger, with the birth of Frederick William in 1795 and William in 1797. Little did Louise know that the latter would one day become Emperor of a united Germany.

However, not all was well among the royal family. In 1796 the Crown Prince himself fell seriously ill, while his brother Louis died of typhoid, leaving the 18 year old Frederica a widow. Worse was to follow as the King himself succumbed to a long bout of illness, dying at the age of 53 in November 1797 after reigning for only 11 years. The Crown Prince succeeded to the throne as Frederick William III, and the 21 year old Louise was now Queen of Prussia. 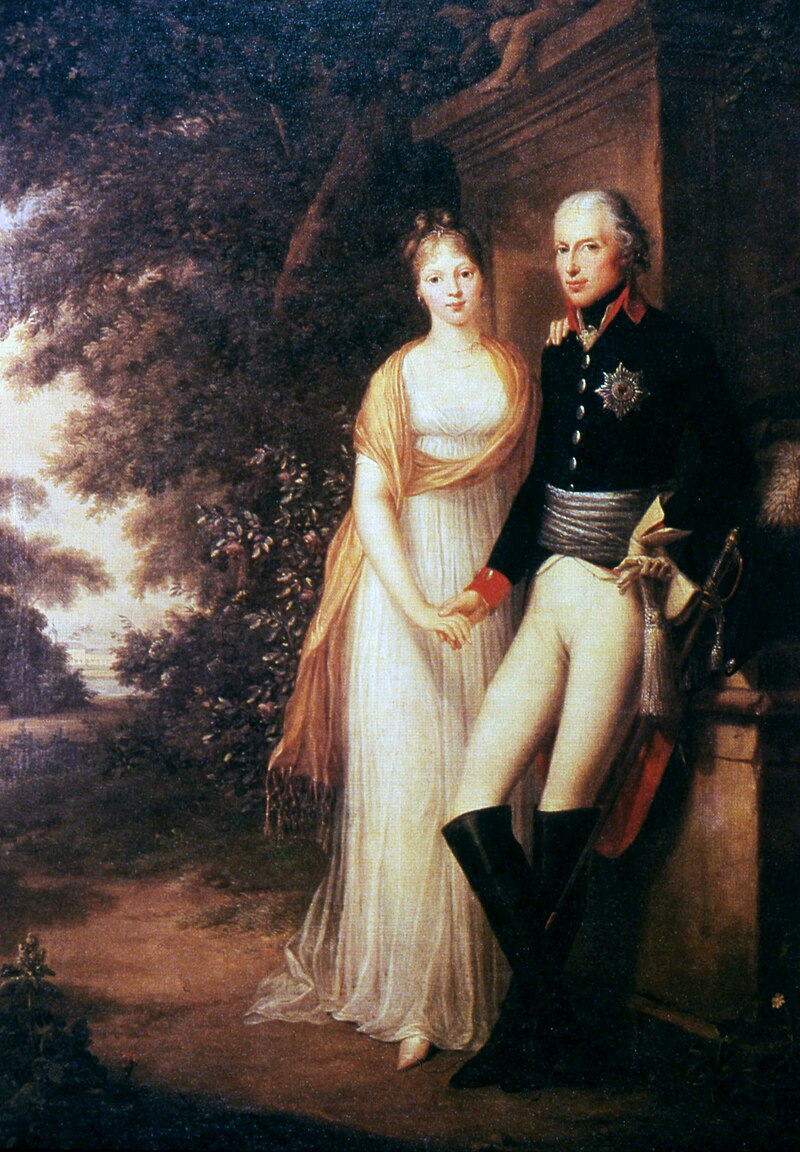 Frederick William had come to the throne seeking to emulate his illustrious ancestor Frederick the Great, not to win glory on the battlefield but to govern an enlightened polity in the interests of his subjects. While the King had inherited a group of mediocre ministers from his father, in his Queen he had a valuable advisor and counsellor. The Prussian political scene had been dominated by men, but Louise managed to establish herself as a key player through her considerable charms and even more considerable intellect. Her social circle included the King’s cousin Prince Louis Ferdinand, and later her brother George of Mecklenburg. 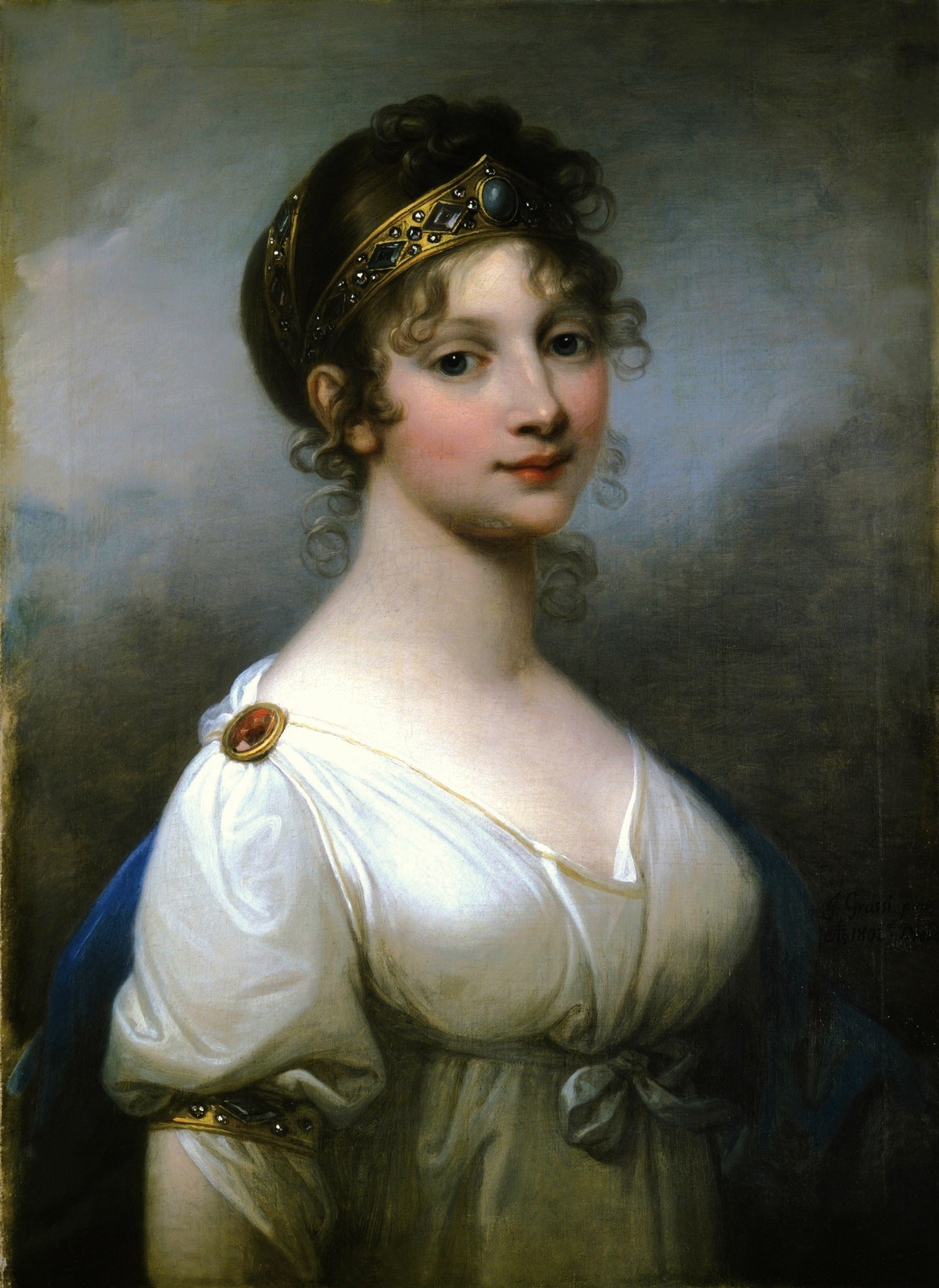 She always accompanied her husband on visits across his realm, where she was welcomed with considerable fervour. Even in the recently partitioned Polish territories Louise was greeted with popular acclaim. Her popularity derived both from her radiant youth and beauty, but also her keen appreciation of the needs and wants of her subjects, and her efforts to improve their lives. In Queen Louise, the Prussian folk had found a mother of the nation whose reputation soon rivalled that of the late Frederick himself. During these visits the royal couple made their acquaintance with a number of talented civil administrators across Germany, including from Louise’s native Hanover. The likes of Baron Heinrich vom Stein, Karl von Hardenberg, and Gerhard von Scharnhorst would soon play a leading role in Prussian state administration.

Given his disdain for war, Frederick William pursued a policy of neutrality at the beginning of his reign, which seemed to bear fruit. He had stayed out of the War of the Second Coalition (1798-1802), and when war resumed in 1803 he was a bystander to the French invasion of Hanover. Likewise, when First Consul Bonaparte crowed himself Emperor Napoleon in 1804, Prussia recognised the new title. In 1805, as Napoleon marched his Grande Armée across Europe to confront the Austrian and Russian armies of the Third Coalition, Prussia continued to watch from the sidelines.

However, it became clear that the increasing influence of Napoleonic France in Germany would compel Prussia to take sides. During his victorious 1805 campaign, Napoleon had ordered Marshal Bernadotte to pass through Prussian-controlled Anspach, violating Prussian neutrality. This stirred the Prussian court into action, and Tsar Alexander of Russia was keen to take advantage. Unlike her husband, Louise had been appalled by Napoleon’s annexation of her native Hanover and his provocations in Germany. Under Louise’s influence, Frederick William and Alexander signed the Treaty of Potsdam in November, swearing eternal friendship in Louise's presence at the tomb of Frederick the Great.

Alexander, Frederick William, and Louise at the tomb of Frederick the Great

However, the defeat of the Austrian-Russian army at Austerlitz in December caused the Prussians to vacillate once again. Napoleon, keen to split the Prussians and Russians, offered to transfer Hanover to Frederick William. While the Prussians entered talks with Russia and France in an effort to get the best deal, Napoleon decided the Prussian alliance was no longer necessary and formed the Confederation of the Rhine, establishing a French protectorate on Prussia’s western border which challenged Prussian dominance of northern Germany. The Prussian court witnessed a tug of war between the peace party, led by Foreign Minister Count von Haugwitz, and the war party, including Louise, Prince Louis Ferdinand, Stein, and Hardenberg. In October, the war party eventually convinced the King to declare war on France, with Tsar Alexander promising Russian support.

The Queen was during this time at the height of her political influence as the de facto leader of the war party. Louise’s influence prompted Napoleon to try to tarnish her reputation, but she always emerged even more beloved in the eyes of the Prussian people. Moreover, she was keen to join her husband on campaign until the calamitous defeat at Jena-Auerstedt forced her to turn back. Within a week the Prussian army had disintegrated and Prince Louis Ferdinand had been killed. Voltaire had memorably described Prussia as an ‘army with a state,’ and now this army was no more. Prussia was at the mercy of its conqueror, the Emperor Napoleon. When Napoleon marched into Berlin, the Queen fled east with her children to Königsberg where she fell ill with typhoid, then to Memel after Napoleon threatened Königsberg as well. There she was reunited with Frederick William and met with Tsar Alexander, who pledged to assist them. However, the Russians decided to sue for peace after their defeat in the Battle of Friedland in June 1807.

The negotiations between took place at Tilsit on the banks of the River Niemen. Napoleon and Alexander negotiated with each other, with Prussia on the sidelines. Napoleon’s proposed to deprive Prussia of nearly half of its territory and population. As the negotiations were being conducted, the King of Prussia could be found pacing on the river bank. Nevertheless, he believed that his wife's presence might soothe their negotiations with Napoleon, and Louise agreed, however reluctantly. Before meeting with her much-loathed enemy on 6 July, she was advised by Hardenberg to address Napoleon with kindness, and to not engage in a politically-charged conversation. Despite their mutual insults toward each other during the conflict, Louise and Napoleon had by the least a civil conversation, but a fruitless one for the Queen as Napoleon refused to commit to anything. Napoleon later wrote back to his wife Josephine, "The Queen of Prussia is really charming and full of coquetry towards me. But don't be jealous...it would cost me too much to be so gallant."

After Tilsit, Louise was devastated by the humiliation of the French Occupation of Prussia, but understood her country now relied upon her strength and optimism. She sought to raise the spirit of her husband, who often spoke of abdication, as well as raising her sons to be the future rulers of Prussia. She was also a supporter of army reforms led by Gerhard von Scharnhorst and August Neidhardt von Gneisenau, and helped bring Stein back into government. The royal family did not return to Berlin until the very end of 1809, when they were warmly welcomed by the city’s inhabitants. The Queen remained deeply unhappy. She fell ill again while visiting her father in Strelitz, and on 19 July 1810 died in the arms of her husband, who would be left alone at the most difficult time of Prussia. The heartbroken King ordered a mausoleum to be built for the late Queen in the grounds of the Charlottenburg Palace, where he would eventually join her upon his death in 1840. To this unfortunate event, General Gebhard Leberecht von Blücher uttered, "Our saint is in heaven". Upon hearing the news, Napoleon remarked, “The King of Prussia has lost his best minister.”

Check out our Queen Louise of Prussia art print