Napoleon Bonaparte undoubtedly deserves his reputation as one of the greatest military commanders in world history. He perfected the organisational and tactical innovations of the time which enabled him to effectively wage war at a scale never seen before in European warfare. We have covered some of his great battles in a blog series. Nevertheless, in spite of his glorious image crafted by the likes of David, Gros, Gerard, and others, Napoleon also experienced a number of setbacks over the course of his military career.

This blog post takes a light-hearted look at some of the less glorious episodes in Napoleon’s career, when he was forced to run away or chose to abandon his responsibilities.

Napoleon conceived of his Egyptian campaign as an attempt to threaten British interests in India. After landing in Alexandria on 1 July, Bonaparte’s army would defeat the ruling Mamluks at the Battle of the Pyramids on 20 July. This allowed the French to take over political administration in Egypt. Nevertheless, a few days on 1 August, British Admiral Horatio Nelson destroyed the French fleet at the Battle of the Nile, leaving the French army stranded.

The French would soon have to contend with hostilities against the Ottoman Empire, and Napoleon led his army into Egypt in January 1799. While Bonaparte’s army did win some impressive victories against greater numbers, they were unsuccessful in besieging Acre, which was defended by the Ottomans and the British allies. Napoleon raised the siege in May and led his army back to Egypt.

Bonaparte recognised that hopes of further success in Egypt were slim, while French revolutionary armies were suffering a series of setbacks against the Austrians and Russians in Germany and Italy. In August 1799 he secretly left Egypt in the frigate Muiron, transferring command to General Jean-Baptiste Kléber – who only found out when Napoleon was already at sea. Several months earlier, he had actually been recalled by the Directory, but the message never got through to him. The way in which he left Egypt could hardly have inspired confidence among those who remained. After over 40 days at sea, Napoleon’s ship evaded all British ships and arrived at Fréjus in Provence on 8 October. While Napoleon would seize power in the Coup of 18 Brumaire in November, Kléber fell victim to an assassin on 14 June 1800, the day of Napoleon’s victory over the Austrians at the Battle of Marengo.

By 1807 Napoleon was well-established on his throne as the Emperor of the French. He had defeated Austria, Prussia, and Russia over the course of three years in 1805-07, giving him control of most of continental Europe. After defeating the Russians at Friedland, Napoleon and Tsar Alexander I of Russia met at Tilsit to discuss peace terms.

As part of the celebrations around the signing of the Peace of Tilsit in July 1807, Napoleon proposed a rabbit hunt with his senior generals. He ordered his trusted Chief of Staff Marshal Berthier to organise the hunt. While Berthier was a brilliant staff officer and responsible for much of the success of Napoleon’s army, he made one of the worst mistakes in his career by procuring tame rabbits from nearby farms.

When the big day came, the 3000-odd bunnies Berthier gathered were released from their cages and – being completely accustomed to human contact – promptly ran towards Napoleon and his marshals. What began as amusement turned into fear when the bunnies kept charging at the cream of the French military establishment. The imperial hunting party shot at the rabbits, but like a well-trained infantry column, the bunnies continued advancing in spite of their fallen comrades. Get our 'Boney and the Bunnies' mug here!

Napoleon sought refuge in his imperial carriage, but to quote military historian David Chandler, “With a finer understanding of Napoleonic strategy than most of his generals, the rabbit horde divided into two wings and poured around the flanks of the party and headed for the imperial coach.” The Emperor eventually managed to get away in the coach, but only after several bunnies climbed up his uniform. It was said that Napoleon was seen flinging rabbits out of the windows as he fled the scene.

By 1812 Napoleon still appeared to be at the height of his powers, but the cracks were already beginning to show. Nevertheless, when he marched on Russia with half a million men under his command, few would have bet against Napoleon prevailing. Nevertheless, the Russian army retreated deep into Russian territory, causing Napoleon to extend his supply lines. By the time he arrived in Moscow, having lost men to disease, heatstroke, and battle while detaching others for garrison duty, he only had 95,000 men with him.

Waiting in vain for Tsar Alexander to come to terms with him, Napoleon eventually abandon Moscow in late October. He attempted to break through to the south but was stopped by Kutuzov’s Russians at Maloyaroslavets, forcing him back the way he came. The war-torn path of retreat and the winter annihilated the remnants of his army.

Napoleon in his sleigh

After barely escaping the clutches of the Russians at the Berezina in late November, in early December Napoleon abandoned his army to return to France as quickly as possible, having learned that General Claude de Malet had attempted a coup d’etat. Although Malet’s coup was quickly suppressed, Napoleon opted to return to Paris to reconsolidate his political control and raise a new army. The episode highlighted the difficulties Napoleon faced as both a political and military leader. He left the remnants of his army under the command of Joachim Murat, who in turn left for his kingdom of Naples in January 1813.

Napoleon’s defeat in Russia was the beginning of the end. After refusing several peace offers, his armies were defeated outside Paris at the end of March 1814. Napoleon was forced to abdicate and agreed to go into exile in the island of Elba, just off the coast of Tuscany. He was allowed to keep the title of Emperor and was allowed to keep a small army of under 1,000 men.

While in Elba Napoleon would receive regular reports of the political situation on Europe. He learned that the allies who had defeated him were experiencing major disagreements as they attempt to broker a pan-European post-Napoleonic peace settlement. He also knew that the restored Bourbon King Louis XVIII was not particularly popular in Paris.

With this in mind, on 26 February 1815, while his British minder Sir Neil Campbell was away on the Italian mainland visiting his mistress, Napoleon and his men sailed to France, once again evading British and French royalist ships. While there was some resistance to Napoleon, he was otherwise warmly welcomed and his numbers were bolstered with royalist deserters. Although Napoleon made some attempts to establish a liberal constitution and claimed he was seeking peace, he had violated an international treaty and was facing the prospect of a million allied troops encroaching on France.

Napoleon recognised that the allies were in no mood for peace, and chose to launch a pre-emptive strike northwards against the Duke of Wellington’s Anglo-Dutch-German army and Field Marshal Gebhard Leberecht von Blücher’s Prussians. Napoleon led his 130,000-strong Army of the North into Belgium, hoping to split the British from the Prussians and defeat each army separately.

After defeating the Prussians at Ligny and forcing the British to fall back from Quatre Bras, Napoleon attacked Wellington’s position on Mont Saint Jean near Waterloo on 18 June. The climactic battle saw Napoleon launch several attacks on Wellington’s lines, but the Allied army held its ground until the arrival of the Prussians in the late afternoon. With the Guard retreating and the Prussians bearing down on him, Napoleon took to his imperial carriage and headed south, but amidst the bottleneck had to abandon the carriage and get on a horse. The sight of the imperial carriage leaving the field led to a panicked rout among the entire French army, though Marshals Soult and Grouchy managed to restore a degree of order over the following days. 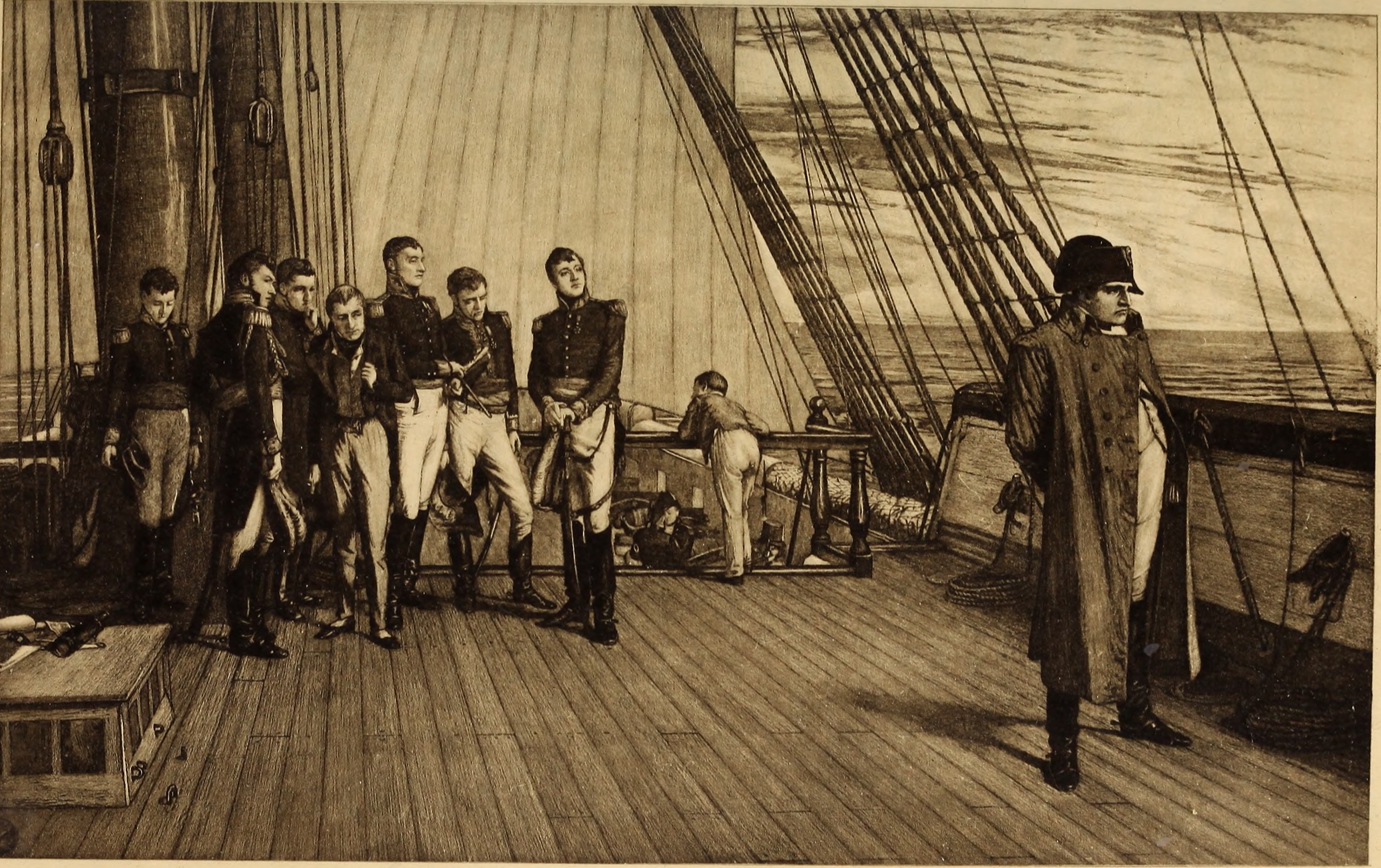 Napoleon aboard the Bellerophon

While Napoleon narrowly managed to escape Prussian captivity, he was rebuffed in his efforts to continue the fight. Knowing his fate would be dire under the yet again restored Bourbon regime, Napoleon and his suite hurried to the Atlantic coast, hoping he could find a ship to take him to the United States. In the event, he was forced to surrender himself to a British ship, the HMS Bellerophon. Napoleon hoped that he might be allowed to live out his days as a country gentleman in some remote corner of England, but his hopes were dashed when the British authorities decided to send him to Saint Helena. There would be no more escaping.